"The Times, They Are a-Changin'" 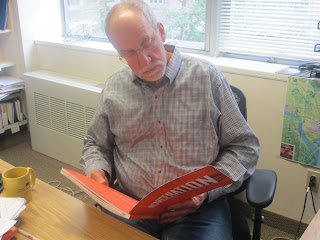 By Peter Leone
In early February 2013, I assumed the role of Acting Executive Director at JPI, an organization I've known and respected since its founding 15 years ago. For the past eight years, I have had the privilege of serving as a member of the Board of Directors, and for the last two, as chair. During my brief tenure here, I’ve made a number of new professional friends and acquaintances.

Earlier this summer, JPI released its first book,  IncarcerationGeneration, a series of reflections written by those who have been most affected by the system as well as those seeking to change it. During the past six months, we also released several reports including Common Ground and Juvenile Justice Reform in Connecticut; both reports describe the forces shaping the decline in juvenile incarceration rates in several states and point to opportunities to develop more humane, cost-effective, and responsive justice policies in other jurisdictions.

Later this month, I return to the University of Maryland, to resume my teaching and research and to continue my work on education and disability issues in juvenile and criminal justice. The UM has been and continues to be a great place to work; my colleagues there have been supportive of research on marginalized individuals and institutional settings. I look forward to returning to the less hectic pace of the academic community.

I am grateful to the staff at JPI for their hard work and dedication during this time of transition and their support of my efforts. The many friends of JPI, including foundations, partner organizations, and individuals also provided valuable guidance to JPI during our transition and search for new leadership. I’m excited about the future of JPI and about its new Executive Director, Marc Schindler who begins Monday, August 5. Marc has a wealth of experience in justice reform as an attorney and youth advocate, funder, system administrator, and change agent. He will bring to the organization the energy, insight, and talents that he's displayed in other roles during his career. I look forward to continued excellence from JPI.


Peter is Chair of JPI's Board of Directors and Professor in the Department of Counseling, Higher Education, and Special Education at the University of Maryland, College Park.
Posted by Justice Policy Institute at 10:20 AM