“Solitary confinement does one thing, it breaks a man's will to live and he ends up deteriorating,” testified Texas death row exoneree Anthony Graves, before a Senate Judiciary Subcommittee on Tuesday. The hearing, convened by Subcommittee chair Senator Richard Durbin, was the first of its kind at the federal level on the issue of solitary confinement.

For over 18 years, Graves spent 22 to 24 hours in an 8-by-12 foot cell, with a steel bed, small desk, toilet and a small window. Inside the hearing room was a replica of such a cell that approximates the living conditions of over 80,000 incarcerated individuals. Psychologist Craig Haney testified that “the cells themselves are often scarcely larger than the size of a king sized bed. Prisoners thus eat, sleep, and defecate each day in areas just a few feet apart from one another.”

It’s a nightmare scenario I’ve read about for the past year in my work on this issue for Solitary Watch. Again and again, I have received letters from individuals held in isolation units across the country, sometimes for 10, 20, and 30 years describing terrible psychological pain. One individual, isolated for over five years, described daily life as consisting of “reading, writing, crying and begging for death.”

Read more »
Posted by Justice Policy Institute at 9:01 AM 0 comments

“People are just not reaching us where we are at.  We want to be reached.” – Washington, D.C. focus group youth participant. 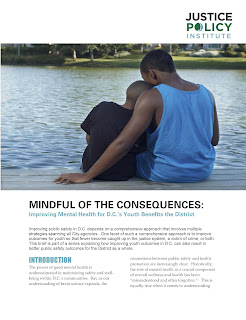 The mental well-being of our youth is crucial to achieving progress and prosperity in our communities. In Washington, DC, youth face particular challenges as disparities in resources and risks vary drastically in just a matter of miles. I wrote JPI’s report, Mindful of the Consequences: Improving the Mental Health for DC’s Youth Benefits the District, to show that current prevention and treatment services do not match the level of need and many youth are at risk for contact with the justice system due to untreated mental problems. To illustrate this, I mapped where arrested youth are coming from: predominately areas of low income and high rates of risk factors that impact mental well-being.

Why Are We Spending So Much To Lock Up Elderly Prisoners Who Pose Little Threat?

This submission was originally posted June 13, 2012 on the American Constitution Society blog. 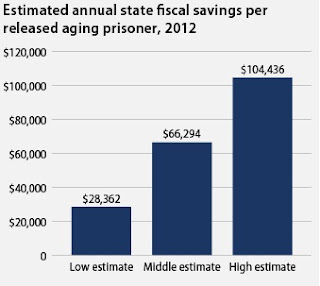 Elderly prisoners are the least dangerous group of people behind bars but the most expensive to incarcerate. Yet despite this truth, the number of elderly prisoners is skyrocketing. Harsher sentences for less serious crimes – one defining characteristic of our failed “tough on crime” and “war on drugs” policies – are responsible for this staggering increase in the number of older prisoners, and taxpayers are taking the hit.

You may be shocked to learn how much money states are dumping into housing aging prisoners who pose little safety risk. Today the American Civil Liberties Union released a report, “At America’s Expense: The Mass Incarceration of the Elderly,” which details the growth of our aging prisoner population, the low public safety threat elderly prisoners pose and the fiscal impact of incarcerating them. Strikingly, the report estimates that the average aging prisoner costs taxpayers about twice as much as the average prisoner.

Read more »
Posted by Justice Policy Institute at 11:12 AM 0 comments

While there may be gridlock in Congress, bipartisanship can still be found in many states, including Maryland. Two weeks ago, Governor Martin O’Malley signed the Earned Compliance Credit and Reinvestment Act of 2012 (HB 670/SB 691) into law.  Sponsored by Del. Michael Hough (R-Frederick and Washington Counties) and Senator Christopher Shank (R-Washington County), the bill had broad bi-partisan support among legislators and activists, which included the American Civil Liberties Union of Maryland, the Justice Policy Institute, and the American Legislative and Exchange Council.

What the Earned Compliance Credit Act does is to extend the concept of “good time credits” beyond those currently incarcerated to those individuals on probation and parole. While incarcerated, people earn credit for good behavior, which encourages such behavior and expedites their release. Increasingly, states such as Maryland are expanding this concept to provide earned compliance credits for individuals on parole or probation. These programs have proven to be a win-win for both public safety and the state coffers, which helps to create bipartisan support.