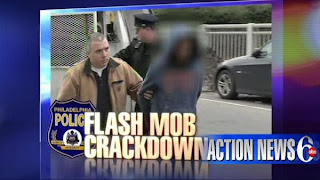 Illinois Gov. Pat Quinn on May 18, 2013 signed into law legislation increasing the criminal penalties against individuals who use electronic communication or social media to organize violent flash mobs. Senate Bill #1005 allows a judge to hand down an extended prison sentence to anyone convicted of mob action who used social media or text messaging to organize it. Supporters of the bill argued the legislation is in response to a “growing trend” of large groups using social media such as Twitter and Facebook to organize flash mobs to commit crimes. Lawmakers and police cited summer-break concerns of mob attacks being on the rise, pointing to previous incidences of teens being arrested after groups began randomly attacking each other and pedestrians along Chicago’s Magnificent Mile causing dozens of arrests and multiple injuries.

"We see it virtually every year when the weather gets warm,” City of Chicago Police Superintendent Garry McCarthy said after the Mag Mile attacks. “We were deployed, we were right on top of it and made the arrests. Preventing it is something that's very difficult to do."
When the attacks referenced by the Chicago Police Superintendent, occurred Chicago residents who lived and shopped in the impacted areas remarked how surprised and dismayed they were that the violence like this had come to their neighborhood. Business owners in the tony area of town pointed to the negative impact the flash mobs would bring to Chicago’s prime tourist areas and both Mayor Rahm Emanuel and McCarthy quickly moved to allay fears. Police were deployed and stationed (in upwards of groups of up to three) on every corner of North Michigan Avenue and arrests of African-American youth who ran evenly slightly afoul of the law became the strategy to squash Chicago’s flash mob problem.

The irony of this swift deployment of resources and bodies did not go unnoticed by communities from both the south and west sides of the city –areas bombarded by high instances of gun and community violence and sadly low instances of community investment and youth support.

Oh, did I mention the new law also requires Internet service providers to release identifying information to law enforcement when there is probable cause a mob action is being organized, the location from which the tweet or message was sent? Yes, big brother is watching and it can get you three to six years!
While I can appreciate the bill sponsors’ desire to keep additional people from being hurt and businesses from becoming the target of criminal activity, I fear a byproduct of Illinois’ new law will be that innocent youth could get caught up in the flash mob and be hit with harsh penalties, and the state could potentially move backwards from its momentum to lessen its juvenile prison population and limit its engagement of youth people in the juvenile justice system.

Legislation like this always misses the point. Additional laws on the books, calling for harsher sentences almost never deter the crime they were created to deter. Do we really think this new law will deter young people from potentially making arrangements to do bad deeds together? Research and experience has shown time and time again the real way to deter the kinds of crime the bill sponsors are targeting is to increase employment opportunities for young people, investments in at risk communities, access to quality schools and links to positive role models. But sadly, those investments never rise to the top of the list when elected officials are looking for answers. They require prolonged investment in resources, time and the grit necessary to stay the course. Unfortunately, like the 140 characters found on Twitter, this bill lacks the ability for any real context or true character to have a positive impact on youth  and a real deterrence to youth crime.

Angela Rudolph serves as the President of Think. Plan. Do. a consulting firm dedicated to providing services that create partnerships that work by delivering expertise on strategic communications, grassroots and government relations and policy analysis. Follow her on Twitter @chigrrll or www.vizify.com/angelarudolph.
Posted by Justice Policy Institute at 8:29 AM