What is the Purpose of Bail?

Let’s clear something up right away: Bail and money bail are not the same thing. Bail refers to any condition of pretrial release. Lots of conditions of release have nothing to do with money; supervision and monitoring, for instance. It’s money bail, specifically, that requires someone to pay an amount of money to get released pretrial, making a person’s financial resources a determining factor in whether or not that person sits in jail. 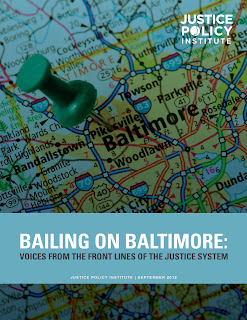 The bail system in Baltimore relies almost exclusively on money bail. Last spring, I interviewed 13experts on the Baltimore bail system, and I asked all of them the following question:

What is the purpose of bail?

What I heard over and over again was this: Bail is supposed to do two things. One: make sure that someone comes back to court for their trial. Two: protect public safety.

And that’s just one of many problems when it comes to bail in Baltimore.
Read more »
Posted by Justice Policy Institute at 3:41 PM 2 comments

As America’s prison population has swelled over the past three decades to become the largest per capita in the world, the number of special interests that feed off the prison industrial complex has grown. The expansion of companies that benefit from crime and incarceration is no accident; it is the result of extensive lobbying by businesses that profit from other people’s misfortune – primarily the misfortune of the poor, who are vastly overrepresented in our nation’s prisons and jails.


Often overlooked among the special interests that profit from the criminal justice system in the U.S. is an industry that portrays itself as one dedicated to helping people get out of jail. In actuality, though, it is involved in keeping people incarcerated in order to protect its bottom line. 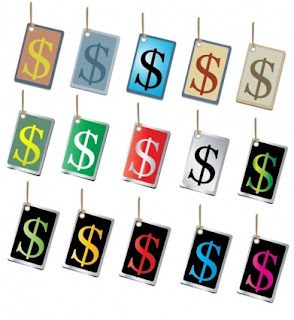 Just 20 years ago in most jurisdictions nationwide, the services of bail bondsmen were only required by defendants who had a high bond set by the court, which typically occurred in cases involving serious crimes or repeat offenders. Most defendants were released through publicly-funded pretrial services that granted release on personal recognizance based on a promise to appear at future court dates.

Currently only Illinois, Kentucky, Oregon and Wisconsin prohibit commercial bail bondsmen. Other jurisdictions have laws that allow, and sometimes encourage, the use of bail bond companies. This expansion of the bonding industry has contributed to high jail populations.

Read more »
Posted by Justice Policy Institute at 11:58 AM 19 comments

Reform Effort on a Century of For-Profit Bail Bonding


As part of the JPI team working on a series of reports about money bail, for-profit bail bonding and the bail and pretrial experience in Baltimore jails, I have been researching bail bonding in the U.S. Much of what I’ve learned has been surprising and eye-opening, but no aspect has been as shocking as the history of bail bonding reform. Or, I should say, lack thereof.
For-profit bail bonding, the practice of paying a third party to guarantee your future appearance at trial for a crime you have been accused of, was established in the U.S. just before the end of the nineteenth century. It was the brainchild of the McDonough brothers, San Francisco organized crime bosses who would bail out bookmakers and prostitutes to get them back to work as quickly as possible. From the beginning, the trade was one of disrepute.
During for-profit bail’s century-plus history, it has undergone periods of reform driven primarily by the facts that it discriminates against poor people, erodes public safety and is prone to corruption. In fact, corruption in for-profit bail bonding has been so pervasive that four states --Wisconsin, Kentucky, Oregon and Illinois -- as well as numerous other jurisdictions, have outlawed or heavily discouraged the practice.

I recently came across an old newspaper article from the March 18, 1912 San Francisco Call, in which police and court leaders vowed to “clear out bail bond evil” and the “shysters” who engaged in it. The “evil” behavior mentioned in the article --dated 100 years ago -- is virtually identical to behavior that can be found today just by searching for "bail bonding corruption."

For the Love of Money Bail: There’s No Science to It

In my careful investigation into the use of money bail, one of the most striking things I encountered was the blatant lack of research supporting this practice. The use of money bail is so accepted in our society that it has taken a place in our general nomenclature.  It’s part of jokes we make about going out and having a good time – “bring your bail money."  It’s part of our fundraising campaigns – “Bail our Executive Director/Principal/Fire Chief out of jail with a contribution!” 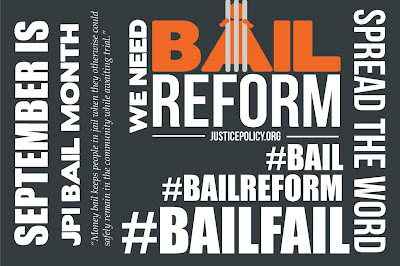 Yet, the lack of research supporting the effectiveness of money bail was remarkable. While the majority of U.S. jurisdictions depend on money bail as a primary way of releasing people from jail while they await trial, the evidence supporting its use is severely lacking. It appears intuitive that posting money would compel compliance in attending court hearings and not being re-arrested, however, little research has been done to confirm this and it is usually supported anecdotally.

Now, with the use of bail schedules, monetary amounts for specific offenses are standardized in many places. Yet, once again, there is no evidence that one sum of money for an offense will better produce pretrial compliance over another sum. There is no empirical evidence showing which amounts of money bail are appropriate for certain types of offenses. Rather, we see bail schedules bolstering the rise in money bail amounts and often having very little relationship to the actual cost of loss or damage caused by the offense.  For certain offenses such as rape or murder, could we ever begin to suggest a monetary amount to be appropriate for those types of violations? 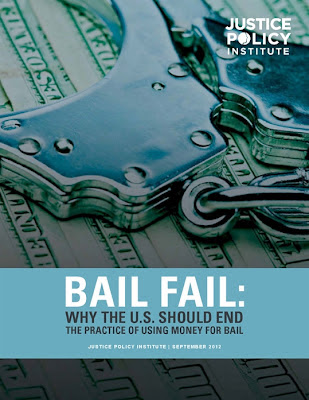 Today, the Justice Policy Institute released the first of three important reports regarding bail. The report highlights the consequences of a system dependent upon an accused person’s ability to pay. It is important to remember that people subjected to this system are considered innocent according to the law. Yet, they are penalized nonetheless. JPI, a national non-profit organization, offers new data and provides recommendations for practical reform.

Entitled Bail Fail, the study highlights how, in conjunction with the large-scale, fast-paced, assembly line nature of the criminal justice system, the bail system creates a reality where the outcome of a criminal case depends less on the facts of the case and more on the finances of the person charged. In the criminal justice system, 80 percent of the accused are too poor to afford an attorney, more than 60 percent are people of color, and the bulk of the cases are low-level, non-violent offenses. Most of this population cannot afford bail and are incarcerated before trial for long periods even though they have not been found responsible for any crime. Bail Fail notes “60 percent of the jail population is not convicted but being held pretrial,” and that “this issue is a huge contributor to the mass incarceration of people in the United States, resulting in overcrowded facilities and unsustainable budgets.” The report further points out that “those too poor to pay a money bail remain in jail regardless of their risk level or presumed innocence . . . U.S. Attorney General Eric Holder in 2011 stated that keeping people awaiting court dates in county jails costs around $9 billion each year.” That amount is roughly equivalent to the annual budget for the Environmental Protection Agency. 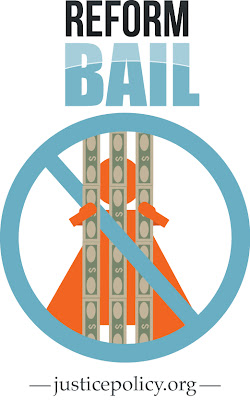 This month, JPI is dedicating all of its resources to educating the public on bail. Some of us know the issue well, but many of us don’t realize that using money as a pretrial release mechanism contributes to jails overcrowded with unconvicted people, burdens low-income communities and supports an ineffective for-profit industry.

Despite a lack of evidence that financial release options improve pretrial outcomes, jurisdictions throughout the country continue to rely on money as a proxy for risk in the pretrial process. This approach weakens public safety and creates two criminal justice systems: one for those with money and one for those without. The for-profit bail bonding industry, a corporate insurance behemoth that profits off the inequitable bail system, has enjoyed over 100 years of corruption and political influence and continues to skew judicial decision-making and put profit before public safety.
Read more »
Posted by Justice Policy Institute at 12:15 PM 0 comments