It’s Not the Kids that are Bad, It's the Policies 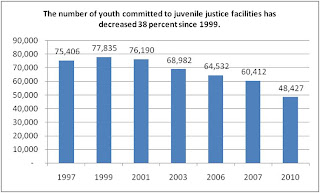 Disappointingly, there seems to be widely-held perception that the youth of today behave worse than any generation of kids before them. A fair amount of research has been dedicated to showing this generation of kids doesn’t behave any more badly than previous generations, but instead it is public perception that casts them as wild and out of control. In the 1990s, this led to a wide array of policies designed to punish youth to the maximum, including laws that transfer youth to adult court, zero tolerance policies that put police in schools, and an overall reliance on confinement. . The result was more than 100,000 youth committed to the juvenile justice system in the late 1990s.

But, over the last five years or so, the number of youth in detention or committed to a facility in the juvenile justice system has been decreasing. In 2010 the numbers reached a new low. (For a little background: detention is when youth are held after they are arrested, but before adjudication or determination of guilt or innocence. Youth are committed after there has been a determination of guilt. Typically, youth who are committed are under the jurisdiction of the state.) New counts from the Office of Juvenile Justice and Delinquency Prevention (OJJDP) are the first updated since 2007 and show that there is an overall decrease in the reliance on confinement for youth:
While it is somewhat difficult to compare detention and confinement statistics beyond what is available on OJJDP’s website, these numbers appear to be lower than they were even in 1975, when 74,270 youth were confined. 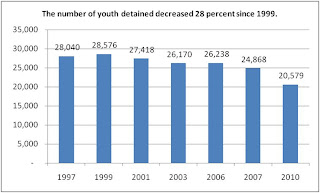 It’s doubtful that today’s youth behave any worse than kids 15 or even 40 years ago, but it does seem that something is going on to reduce the number of youth detained or committed to the juvenile justice system. Likely, that something has to do with policy shifts, initiatives, and advocacy all designed to reduce reliance on incarceration, promote prevention and intervention, and utilize community-based alternatives.
Certainly the fact that crime is at a 30-year low and financially strapped jurisdictions are hard-pressed to continue to lock up kids at such a high cost has had an impact, but in addition to these larger social factors, a variety of systems changes have likely had a significant impact on the reduction of youth locked up. As evidence, the use of diversion has also nearly tripled since 1999. Here are a few examples of some system changes that have likely contributed to the reduction of the number of youth locked up:
Of course, the work of advocates, organizers, and committed people across the country have helped make many of these policy changes possible, in addition to numerous pieces of legislation, administrative changes, facility closures, and general support for change.
But, there is still a long way to go. In 2010, there were 1,365 youth convicted in adult criminal court, which is almost a doubling of the number of youth convicted in adult criminal court in 2007. Racial disparities haven’t changed much either. Even though youth of color make up about one third of the general population, they still make up about two-thirds of the youth involved in the juvenile justice system. And, youth are still confined for status offenses –offenses that wouldn’t be illegal if committed by an adult, like running away, for example.
The President is about to release his 2013 budget next week. We all know that 2013 is going to be a tough budget year, but nonetheless, appropriately funding federal initiatives that support the types of initiatives mentioned here that reduce the number of youth committed or detained, help prevent them from getting there in the first place, and protecting them if they do, always goes a long way to saving us money, keeping us safe, and supporting our youth in the long run.
Amanda Petteruti is the Associate Director of JPI.

Thanks to Benjamin Laman-Maharg for assisting in the compilation and analysis the data
Posted by Amanda Petteruti at 1:11 PM