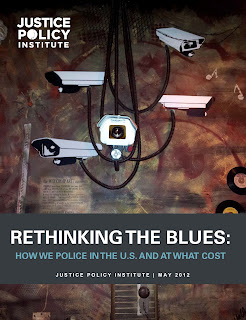 Retired Police Chief David Couper reached out to JPI following the release of “Rethinking the Blues: How we police in the U.S. and at what cost.”  As a law enforcement trainer and writer on policing, Chief Couper shared with us his thoughts on what’s needed to improve law enforcement efforts in the U.S.

I have been a member of the clergy for almost 20 years. Prior to that, I was chief of the Madison (Wisc.) Police Department. At the time I retired, we were acclaimed as one of the best police departments in the nation and that year I received the national police leadership award from the Police Executive Research Forum. But I couldn’t stop myself from thinking about police on a national basis as my interest in peace and justice went beyond Madison and into the world.

When I started reflecting on police, where they are now, and where they should be, I came to identify four major obstacles to their improvement: anti-intellectualism, the quickness to resort to force, corruption (personally and organizationally), and a pattern of discourtesy; especially toward people of color and the poor. Unless those four obstacles are overcome, we will see little improvement in our nation’s police.

But there is hope. There are seven steps, if taken by our nation’s police, and which I effectively used in Madison, that can bring them out of the past and into the present:

1.) envisioning themselves as protectors of our civil rights;
2.) hiring the best and brightest to serve;
3.) deeply listening to the community and their officers;
4.) training and leading in an adult, collaborative manner;
5.) continuously improving everything they do and the systems in which they work;
6.) constantly evaluating their effectiveness; and
7.) sustaining the good practices they have developed.

David Couper is a retired police chief with over 30 years experience. His new book is “Arrested Development: A Veteran Police Chief Sounds Off About Protest, War, Corruption and the Seven Steps Necessary to Improve Our Nation’s Police.” He also blogs at http://improvingpolice.wordpress.com.
Posted by Justice Policy Institute at 2:44 PM