After a recent, narrow defeat of what would have been the largest private prison expansion in United States history in the Florida House, JPI went to the Hill last Thursday to discuss the dangerous private prison industry and its effect on American communities. The four person panel drew a crowd of over 50 people.
The panel members included:

This was my first time attending a briefing like this, and I wasn’t sure what to expect. I don’t think I realized how many people were going to be in attendance. When I first got there, maybe 15 minutes early, there were only a few people in the room. However, that quickly changed as people began to steadily funnel in. The crowd seemed fairly diverse, with representatives from various nonprofits, governments, and even occupyDC.

The panel was largely focused on issues relating to the for-profit nature of the private prison industry and how this makes criminal justice reform difficult at best.

Understaffing: According to Bill Mefford, private prisons are chronically understaffed compared to their public counterparts. David Shapiro says this leads to a whole host of issues which include higher rates of prison violence, assault, escape, and random drug hits. Joshua Miller says the for-profit prison model causes understaffing because labor makes up around 70% of the total operating cost of a prison. Private prisons try really hard to reduce this cost in order to increase their profit margin.

Staff Turnover: Joshua Miller says that turnover was 52% in 2011 in private prisons. This is over three times as high as turnover rates in public facilities. High staff turnover leads to the same problems as understaffing. The profit motive of private leads to increased turnover rates because in an effort to further increase the bottom line, private prisons pay their employees about 30% less on average than their publicly employed counterparts.

Disturbing Living Conditions: David Shapiro referenced an ACLU report in describing the “atrocious conditions” in which private prison populations were forced to live. Shapiro described the conditions found in the Mississippi Walnut Youth Detention Center where youth live in “barbaric conditions.” Staff members sell drugs to inmates, and they also sexually and physically abuse inmates. Complying with any sort of regulation would be expensive, which is in part why, according to Tracy Velázquez, private prison corporations have established a revolving door system of “oversight” in which the overseers and regulators are often former or future employees of CCA and/or GEO Group. 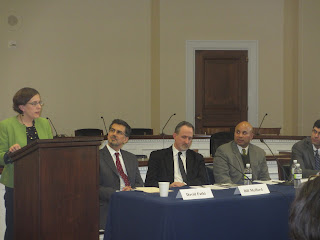 With evidence of apparent cost-savings from privately run prisons mixed at best, the moral cost of continuing the transition from public to private incarceration clearly outweighs any supposed benefit of prison privatization their may be.

The consensus call to action of the panel was increased oversight and enforcement of minimum human rights standards in private prisons. The panel viewed this as the next practical, politically viable step in the fight to take down private prisons. Divestment of funds from private prisons by large or influential organizations like the United Methodists might also benefit the cause. There is currently a protest against Wells Fargo for its heavy investment in the private prison industry.

I will be urging my friends and family to put their money elsewhere until Wells Fargo fully divests from private prisons. I encourage you to join the grassroots movement as well. You can find more information about the Wells Fargo divestment campaign here, here or here. Although this won’t have an effect on Wells Fargo’s massive bottom line, they are starting to receive a lot of bad press which hopefully will encourage them to change their investment behavior.

By Benjamin Laman-Maharg is an intern at JPI and a sophomore at George Washington University.