A national agenda for criminal justice reform: Not just second chances, but a rational first response 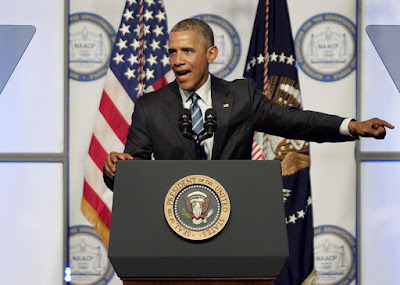 During a powerful speech to the NAACP convention on Tuesday, President Obama outlined sweeping reforms to ensure our justice system is more fair and effective. He will be the first President to visit a federal prison, and he commuted more sentences in a single day since Lyndon B. Johnson.

These efforts will surely illuminate some of the most glaring problems with our nation’s justice system, such as the excessive incarceration of people convicted of nonviolent drug offenses and deplorable practices of solitary confinement. Solving the nation’s crisis of incarceration will require sustained attention and committed action. And while removing or reducing time served by people convicted of nonviolent drug offenses would be significant, ending the era of our incarceration generation requires deeper changes where incarceration is used as the last resort. This would be a dramatic shift from current practices where incarceration is too often used as the first response to social problems.

Obama’s speech rang like music to the ears of community activists, advocates and experts who have long called for reforms like eliminating mandatory sentences, ending the use of solitary confinement, and investing in hard-hit neighborhoods. As the President noted, there is nothing new about recognizing the failures of the criminal justice system. What has changed is a growing political and popular consensus that business as usual isn’t working for anyone.

When I learned of Obama’s scheduled visit to the El Reno federal prison in Oklahoma on Thursday, my first thought was gratitude for an encounter that is long overdue. My second thought was disbelief. Was it possible that a sitting President of the United States, which spends $80 billion each year to house the world’s largest incarcerated population, has never before investigated the impacts firsthand? Imagine a nation where health care or education policy is designed and implemented on state and federal levels without the Commander in Chief ever stepping into a hospital or school.

It’s well known that the justice system disproportionately impacts young men of color, and treats people of color differently for the same crimes. Essentially, there is glaring unfairness in our so-called justice system. The President also spoke to the enormity of the system in terms of its costs and impact on children and families.

Consider the magnitude.  Expanding on an estimate from a Bureau of Justice report, roughly 2.5 million children have incarcerated parents. Using the same math and considering that about 70 million people have criminal records that means approximately 78 million children have parents with a record. In the end the total number is staggering: out of a national population of 318.9 million people, 153 million are either in prison or jail, have a criminal record, or have parents who are in prison or jail, or have a conviction.

And this is the first time a sitting President has visited a U.S. prison?

I have every hope that the President will be deeply impacted by what he experiences in El Reno. In my own work, visits to prisons and encounters with people in prison have been some of the most powerful ways to motivate reform. Following the President’s lead, every governor, mayor and county executive should be called on to visit an adult or juvenile facility within the next 60 days.

I know that the commutations the President ordered this week will mean everything to the people who have been given a second chance. And diverting individuals or reducing sentences for people convicted of nonviolent offenses would make a significant dent in the imprisoned population. But sentencing reform should be considered more broadly and account for actual public safety benefits.

Marc Mauer of the Sentencing Project has advanced the idea of sentencing maximums, which cap sentences at 20 years except for the most extreme instances. Decades long sentences increase costs without advancing safety. To implement comprehensive reforms we need to address excessively long sentencing system-wide, not just for non-violent drug offenders.

The President says that we are a people that believe in second chances. I agree with that, but we also must scrutinize our first responses. Now is the time where we must work together to ask and answer the hard questions: In what instances is prison the correct response? For whom is it the right option? And what is it intended to do?

To truly transform our justice system, we need to not only open our eyes to its failures but also question its intent. We all need to work together to make sure that this shift is not just in the way we talk about prisons, but ultimately in how they are used—as a last resort, in limited circumstances, and always measured by their fairness and effectiveness.