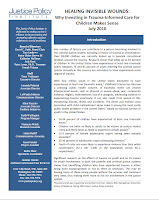 Going into my senior year in high school I worked an entire summer from sun up to sun down to save enough money to help my mother buy me a car. When I finally got that car it was broken into not long afterward. I felt angry, stranded, violated, sad and a whole host of other emotions but for whatever reason, I never felt like a victim. Why not? I had obviously just been victimized. In hindsight, just like many other young black males, I probably didn’t feel like I fit the bill of what a victim was according to mainstream society and my naive acceptance of that blinded me to the fact that I was indeed the victim. Combine a lack of recognition, pride and “street code” and you get a huge section of society omitted from the victim services conversation. This omission has been a misstep in the victim’s reform movement and continues to be the Achilles heel to victim services offered to young black victims. If they don’t see themselves as a victim, then they certainly aren’t going to understand the importance of getting help through victim services. According to JPI’s Healing Invisible Wounds: Why Investing in Trauma-Informed Care for Children Makes Sense, people of color are more likely to be victims of crime and violence and youth who have been victimized or experienced trauma are more likely to be involved in illegal behavior and have disproportionate contact with the justice system.