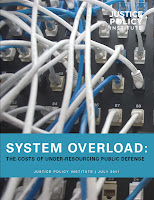 Focusing on changing youth behavior is important. However, youth success also depends on what we as adults do, particularly when it comes to youth who come in contact with the justice system. The Justice Policy Institute’s new report, “System Overload,” shows how our shortchanging of public defender systems can have significant and lasting negative affects for both youth and adults who rely on them.

The right to effective counsel, regardless of ability to pay, is guaranteed by the U.S. Constitution. This includes youth facing juvenile delinquency proceedings. However, a lack of financial resources for public defenders means that attorneys don’t have enough time for each case. Youth may not see their attorney until shortly before a hearing, or their public defender’s office might not have funding for investigators to look into the facts around the alleged offense. The following are some possible consequences of not having a robust public defender system:

With most states and counties searching for places to trim budgets, public defenders are being forced to defend their own worth to the community. We believe that better funding for public defense not only will give us a fairer justice system, it also will ensure kids get the legal support they need to keep them on track for the best future possible.

This story is printed with permission from Reclaiming Futures, a nationwide initiative working to improve alcohol and drug treatment outcomes for youth in the juvenile justice system.
Posted by Justice Policy Institute at 11:30 AM